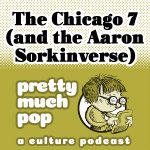 In lieu of an Oscars episode, we consider one of the nominated films, The Trial of the Chicago 7, and the career of its writer/director, Aaron Sorkin, which started with A Few Good Men through four TV series (most notably The West Wing), and films like The Social Network, Steve Jobs, and Molly's Game.  Brian, Erica, and Mark consider Sorkin's stock recurring characters … END_OF_DOCUMENT_TOKEN_TO_BE_REPLACED