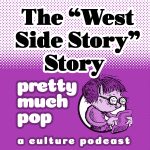 Did it make sense for Steven Spielberg to remake one of our nation's most beloved musicals (with music by Bernstein and Sondheim!), attempting to fix the parts that did not age well politically? Is the new version a modern classic or a doomed Frankenstein? Your host Mark Linsenmayer is joined by Broadway scholar, theater critic, and actor Ron Fassler; Remakes, Reboots, and … END_OF_DOCUMENT_TOKEN_TO_BE_REPLACED