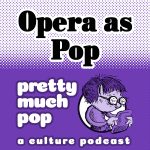 Opera used to be a central part of European pop culture, Pavarotti was as big a pop star as they come. But still, it's now the quintessential art-form of the wealthy and snobbish. What gives? Guest Sean Spyres from Springfield Regional Opera joins his sister Erica along with Mark and Brian to discuss opera's place in culture (including its film appearances), how it's … END_OF_DOCUMENT_TOKEN_TO_BE_REPLACED