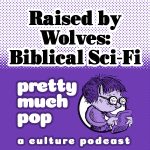 What happens when a male android loves a female android VERY much, and they nurse human embryos together on a distant planet after fleeing from war-torn Earth? Why the female android flies and makes a bunch of people explode with her eyes, that's what happens! ...In the first episode of this bonkers HBO Max series by Aaron Guzikowski (with notable assistance from Ridley Scott … END_OF_DOCUMENT_TOKEN_TO_BE_REPLACED