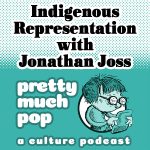 Jonathan built his career playing 19th century Indians on horseback and is best known for his voice acting as John Redcorn III in King of the Hill (starting season 2) and then for his recurring role as Chief Ken Hotate in Parks and Recreation. Erica, Mark, and Brian talk to him about those roles plus acting in The Magnificent Seven, True Grit, and his current role as … END_OF_DOCUMENT_TOKEN_TO_BE_REPLACED