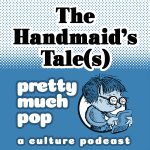 Mark, Erica, and Brian take on both Margaret Atwood's 1985 novel plus the Bruce Miller/Hulu TV series through season 3. There's also a graphic novel and the 1990 film. We get into what's needed to move a novel to the screen like that: The character can't just remain passive as in the novel in order to keep us suffering with her past the first season as storytelling beyond … END_OF_DOCUMENT_TOKEN_TO_BE_REPLACED