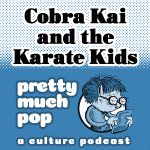 Did anyone suspect that the beloved 1984 "Kid Rocky" karate film (and its decreasingly beloved sequels) would now be not just remade but revived as the YouTube-Red-turned-Netflix hit Cobra Kai? Is this new show actually good, or just living unhealthily on nostalgia and the fascination of watching teens and middle aged people fistfight and fall in love. Mark-san, Erica-san, and … END_OF_DOCUMENT_TOKEN_TO_BE_REPLACED