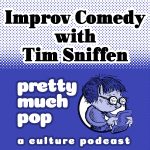 What role does improv comedy play in popular culture? It shows up in the work of certain film directors (like Christopher Guest, Adam McKay, and Robert Altman) and has surfaced in some of the TV work of Larry David, Robin Williams, et al. But only in the rare case of a show like Whose Line Is It Anyway? is the presence of improvisation obvious. So is this art form doomed to … END_OF_DOCUMENT_TOKEN_TO_BE_REPLACED