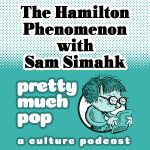 Erica, Mark, and Brian are joined by Broadway actor Sam to discuss this unique convergence of musical theater, rap, and historical drama. Does Hamilton deserve its accolades? We cover the re-emergence of stage music as pop music, live vs. filmed vs. film-adapted musicals, creators starring in their shows, race-inclusive casting, and the politics surrounding the show. Some … END_OF_DOCUMENT_TOKEN_TO_BE_REPLACED