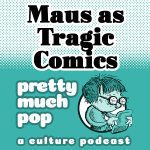 In light of its being recently banned in some settings, we discuss Art Spiegelman's Maus (1980-91), which conveys his father's account of living through the Holocaust. We also consider other war-related graphic novels like Marjane Satrapi's Persepolis (2000) and George Takei’s They Called Us Enemy (2019). Mark is joined by comics scholar Vi Burlew, comics blerd/acting coach … END_OF_DOCUMENT_TOKEN_TO_BE_REPLACED 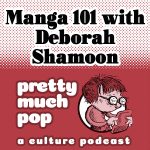 One of our goals on Pretty Much Pop has been to look into not just our favorite creators and genres but into things that get a lot of buzz but which we really don't know anything about. Manga is a great example of a "look what these crazy kids are into today" kind of area for many (older) Americans. Deborah Shamoon, an American who teaches Japanese studies at the National … END_OF_DOCUMENT_TOKEN_TO_BE_REPLACED