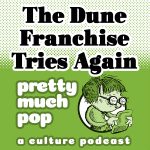 Yes, we have another Dune film, and this time Warner Bros. is serious about a franchise, with at least one sequel planned and a prequel TV series in the works. With thousands of years worth of world building, the books by Frank Herbert and the world now being fleshed out by his son Brian Herbert with Kevin J. Anderson offer more source material than Star Wars for potential … END_OF_DOCUMENT_TOKEN_TO_BE_REPLACED