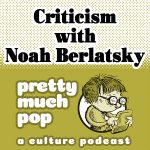 Do we need professional critics regulating our entertainment intake? Noah has written for numerous publications including The Washington Post, The Atlantic, NBC News, The Guardian, Slate, and Vox, and his work has come up for us in multiple past episodes. He was invited to join Mark, Erica, and Brian in spelling out the functions of criticism, the idea of criticism as art, and … END_OF_DOCUMENT_TOKEN_TO_BE_REPLACED