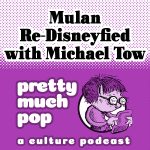 Is the new Mulan the equivalent for Asian-Americans what Black Panther was for African-Americans? The largest entertainment machine we have featured an all-Asian cast telling a traditional Chinese story aimed at the widest possible audience. Did it work? Actor Michael Tow joins Erica, Mark, and Brian to discuss the development, aesthetics, and political controversies … END_OF_DOCUMENT_TOKEN_TO_BE_REPLACED