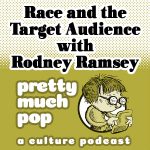 We've all felt at various points (maybe at most points) that some media creation has reached us by mistake, that we are not the target audience. 20th century American TV was aimed largely at a white majority, with a parallel, underfunded channel of content aimed at people of color. So how have things changed? There still seem to be "black shows,"  but how do they fit in … END_OF_DOCUMENT_TOKEN_TO_BE_REPLACED