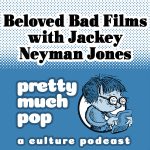 What makes a film transcendently, fascinatingly bad, as opposed to merely unwatchable? A number of turkeys have become cult classics whose surviving cast members are lauded at conventions and bear witness in loving documentaries exploring how and why such movie monstrosities could have been made. Jackey Neyman Jones was six years old in 1966 when she appeared (just her body; … END_OF_DOCUMENT_TOKEN_TO_BE_REPLACED