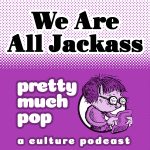 Mark is joined by comedian Matty Goldberg; filmmaker/podcaster Rolando Nieves; and comedy juggler Josh Casey to discuss the Jackass franchise that began in 2000 in light of the new (final?) film Jackass Forever. This is perhaps our sole remaining form of popular entertainment that relies on sheer physicality, without the gamesmanship of sports. What's the appeal of this … END_OF_DOCUMENT_TOKEN_TO_BE_REPLACED